A 4 yr child was brought in by his parents with the complaint that he lies often and is such a glib liar that no one suspects him.

Why does a child lie? &how should parents react?

Well, it depends on age of the child and parents’ understanding of the lie. Whatever be the circumstance, parents have to keep a cool head and avoid the commonest knee jerk reaction – shouting at/ hitting the child or blaming the other parent.

We hope to help initiate a process of thinking as to why a child lies; apply it your specific scenario and then decide if any professional help is necessary in tackling the situation/ behavior or how you can handle it yourself.

Children lie is a well-accepted fact. This is one skill they don’t need to be trained for. N, my 24 mth old granddaughter, once came out of bedroom, went to hergrannie and demanded apple, innocently saying ‘Mamma sleeping’ when V, her mother was standing right behind her. Once she realized she was caught, she gave a sheepish smile and went and hugged V. Such self-serving lies are the first kind of lies many young kids try out. 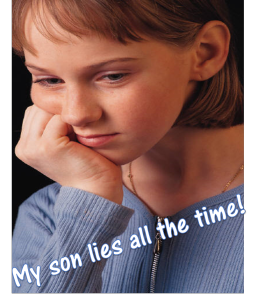 This does not mean we ignore all lies or start feeling proud about them.

How to prevent lying in the future?

Try to solve the problem instead of blaming the child. Say: “I see you broke the jam bottle. Come, we’ll clean it up. But be more careful in future; ask mom to open the bottle, you could have cut yourself up badly”.

If you notice frequent lying, act on it strongly and immediately, it is just too important to ignore.

Dr Chander Asrani, is a post-graduate in Family Medicine. He has over 37 years in family practice and has been offering wellness and disease management services to corporates. He is soon to launch virtual clinics.  He writes on various subjects of wellness; learning to live with chronic ailments and stress. Know more about him at about.me/drasrani.