15th August, Times of India carried a news item on cover page, ‘1.7 million deaths due to too much salt in diet’ quoting a study by prestigious New England Journal of Medicine (NEJM). It went on to add, ‘average consumption of salt across the globe was 3.95 gm per day, nearly double the 2 gm recommended by the World Health Organization.’ A similar Indian study, the INDIAB study of the Indian Council for Medical Research — found that the mean salt intake in urban India was 7.6 gm per day, much higher than the global mean.

There is an on going Salt Debate on how much salt should one consume daily.

Lifecountz requested Prof Dr Alaka Deshpande to provide a fact sheet on salt; she readily obliged and we share it you – our discerning readers

Salt is a mineral substance composed primarily of Sodium Chloride (NaCl). It is a main mineral constituent in sea water (aprox 35 gm/ litre). Salt is absolutely essential for human health and taste of salt is one of the five basic human tastes.

It is used universally in cooking, as a seasoning. In most homes/ restaurants it is also on the table at mealtimes for people to sprinkle on their own food. Commonly used table salt is a refined salt containing 97-99% of sodium chloride. It is produced from salt mines or by the evaporation of seawater.

Coming to health, researchers say that Salt is bad for blood pressure & kidney but good for brain development.

How much salt should one consume daily?

The WHO (World Health Organization) recommends that all healthy adults should consume less than 2,000 mg of sodium (5 gm of table salt) per day

But for people who are over age of 40 or have high blood pressure, the recommended dose reduces to 1,500 milligrams of sodium daily.

From where does our body get salt!

70% of dietary sodium comes from processed foods and restaurant foods

Researchers have also shown that a small reduction in salt intake daily could prevent nearly 100,000 heart attacks and 92,000 deaths each year.

What happens when there is more salt in the body?

What is low salt?

Common table salt has 40% sodium and 60% chloride. As the name suggest, low sodium salt, although tastes like common salt, contains less sodium. This is done to help cut down our sodium intake, which may cause high BP, heart disease, water retention and kidney problems.

In low sodium salt, some sodium is replaced with potassium. We must understand that potassium can create problems in large doses. Low sodium salt also MUST be taken in moderation.

Low sodium salt is good for people with heart ailments & hypertension but for patients with compromised kidney function (kidney failure) potassium can be fatal.

Other forms of low sodium salts are ones where sodium is replaced with onion, garlic, celery & rosemary.

What is rock salt? Is it really healthier than common table salt?

Rock salt is the mineral form of sodium chloride i.e. common table salt derived from the seas and contains some 70-80 minerals including sodium and iodine. It is used as a condiment and food preservative. It is less salty and has low sodium content than table salt (which is refined and thus contains more salt) and hence may not be as harmful for blood pressure, in equal quantities. 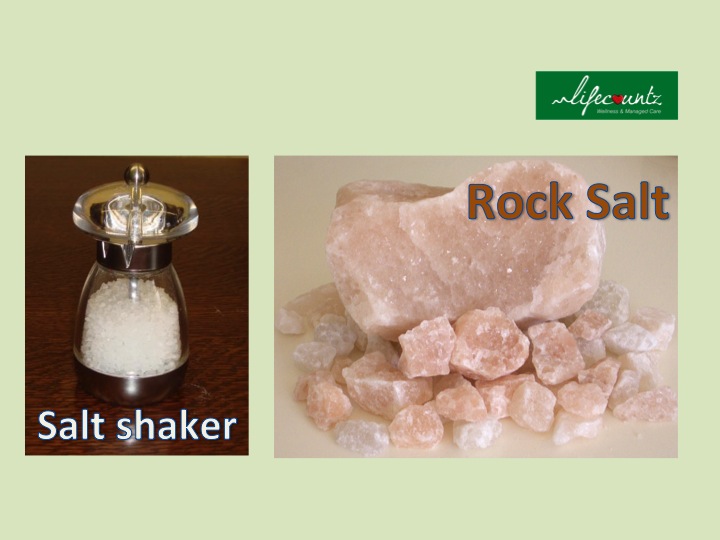 So, should we stop salt completely from diet?

No. Reducing the salt entirely from the diet will be very dangerous just as consuming excess salt is! Following measures should be adapted in cutting down the salt intake

Prof Alaka Deshpande has an experience of over 45 years teaching and treating patients at JJ group of hospitals, Mumbai. She specialises in Infectious diseases esp. HIV-AIDS and received Padmashree for her pioneering work in the field of HIV-AIDS. She also played a crucial role in developing the nuclear medicine, critical care and AIDS units of the Sir JJ Group of Hospitals, Mumbai. She is a member of Scientific Advisory Committee, National Ageing Research Institute (NARI)